Take a trip through history with our 5-star Regimental Museum, Visit and relax in peace in the volunteer kept gardens, explore our collection or grab a bite to each in the comfortable Duchess Jean Tearoom

THE BEGINNING & THE FRENCH REVOLUTIONARY WARS 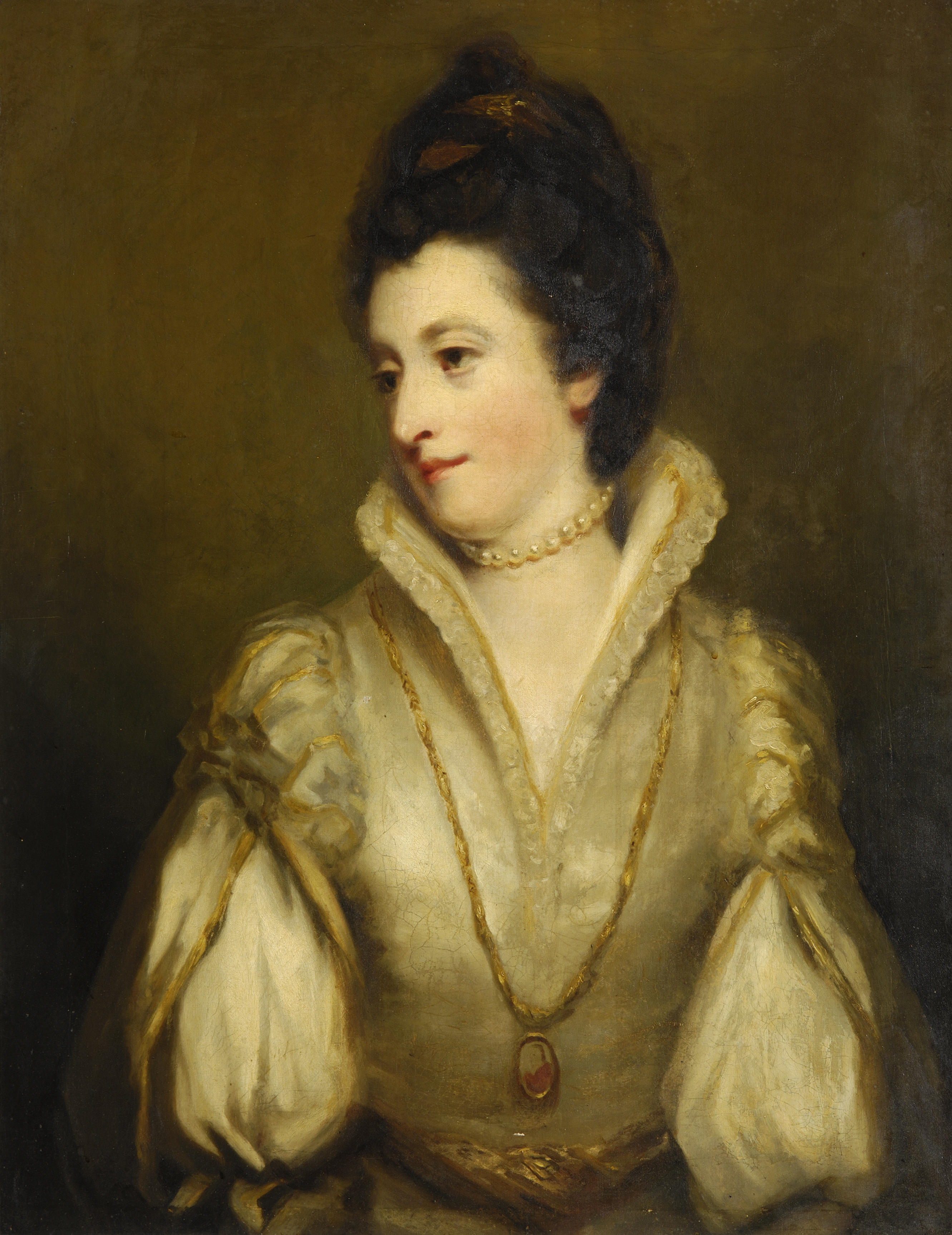 Raised by Alexander, 4th Duke of Gordon, in the spring of 1794, The Gordon Highlanders were originally known as the 100th Regiment of Foot. Many of the original recruits were drawn from the Gordon estates. The early recruitment campaign was assisted by the 4th Duke’s wife, the Duchess of Gordon (Duchess Jean). The Duchess is said to have offered a kiss as an incentive to join her husband’s Regiment.

Renumbered the 92nd in 1798, the Regiment went on to see extensive action during the war against revolutionary France. From the Netherlands, Egypt, Denmark and the Peninsular War through to the Battle of Waterloo in June 1815, The Gordon Highlanders established a reputation as one of the most effective and dependable regiments in the British Army.

The Regiment adopted as its cap badge and motto the crest of the Dukes of Gordon. The main cap badge worn by the Gordon Highlanders bears the Royal Stag head of the Marquis of Huntly, which sits on a Duke’s crown. The surrounding ivy also represents the Gordon family.
The motto ‘Bydand’ is visible underneath the crown. This is a Scots word meaning ‘Steadfast’, not to run away from danger, to keep going whatever the difficulties.

As well as fighting the French in Europe, Britain was expanding its presence in India. In 1787, the Honourable East India Company funded the raising of the 75th (Highland) Regiment of Foot. For the next 20 years, the 75th fought to extend British rule in India. Both the 75th and 92nd later fought in the Indian Mutiny in 1857 – 58.

Later in the 19th century, the expanding British Empire saw The Gordons serve on the frontiers of Egypt, Sudan and South Africa. One of many extraordinary feats was a march over 320 miles of Afghanistan’s unforgiving terrain between Kabul and Kandahar, in 1880, which The Gordons achieved in just 23 days. In 1881 the old 75th (Stirlingshire) Regiment, with its own record of war service in India, was incorporated into The Gordons, which had now established a permanent presence in Aberdeen. At the same time, the development of local volunteer and militia units into the Territorial Army gave the Regiment a truly North East character.

On 20 October 1897,1st Battalion The Gordon Highlanders achieved enormous fame when it stormed the Heights of Dargai, on India’s North-West Frontier. 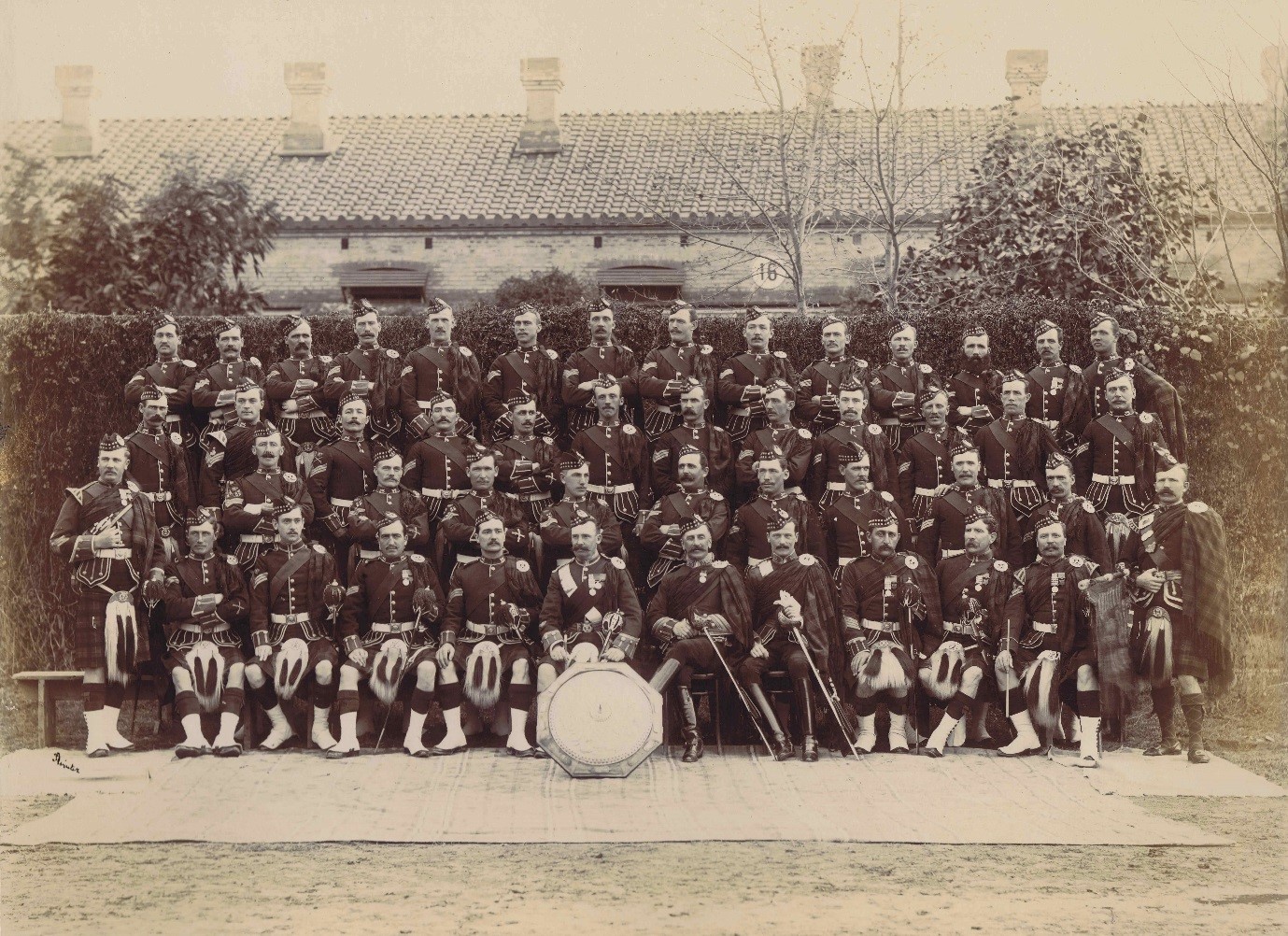 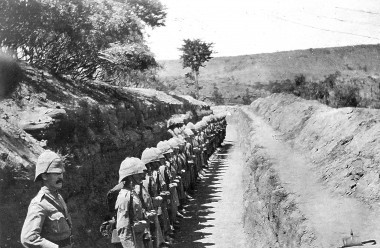 Immediately after the Regiment’s success in the Second Afghan War, it was sent to South Africa where war was brewing between Britain and the Boers: settlers of Dutch and French origin fighting over their independence.

At the Battle of Majuba on 27th February 1881, a force of 550 men, including three companies of the 92nd, was forced to retreat after a British attack ended in failure.

Twenty years later the same issues led to a much larger war with the Boers. Between 1899 and 1902, both Battalions of The Gordon Highlanders saw continuous action in a long and difficult war. During this intense period of action 6 Victoria Crosses were awarded to the Regiment.

The sheer scale of the conflict in the Great War, and the enormous demand for men, transformed The Gordon Highlanders. Some 50,000 Gordons served in its regular, territorial and service battalions. Between 1914 and 1918, the Regiment kept 9 Battalions on the Western Front. By the end of the war they had been awarded 65 new Battle Honours and suffered over 29,000 casualties, 9,000 of whom died. Almost every community and family in the North East, and many elsewhere, were affected. 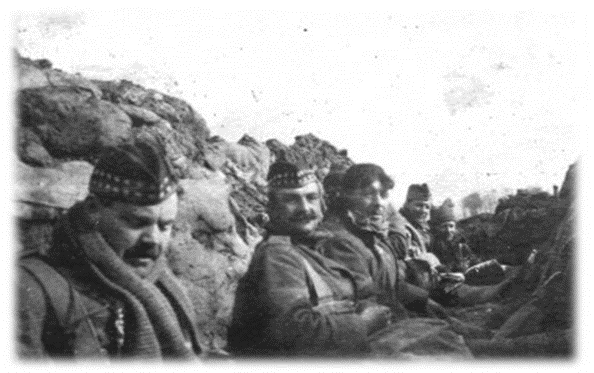 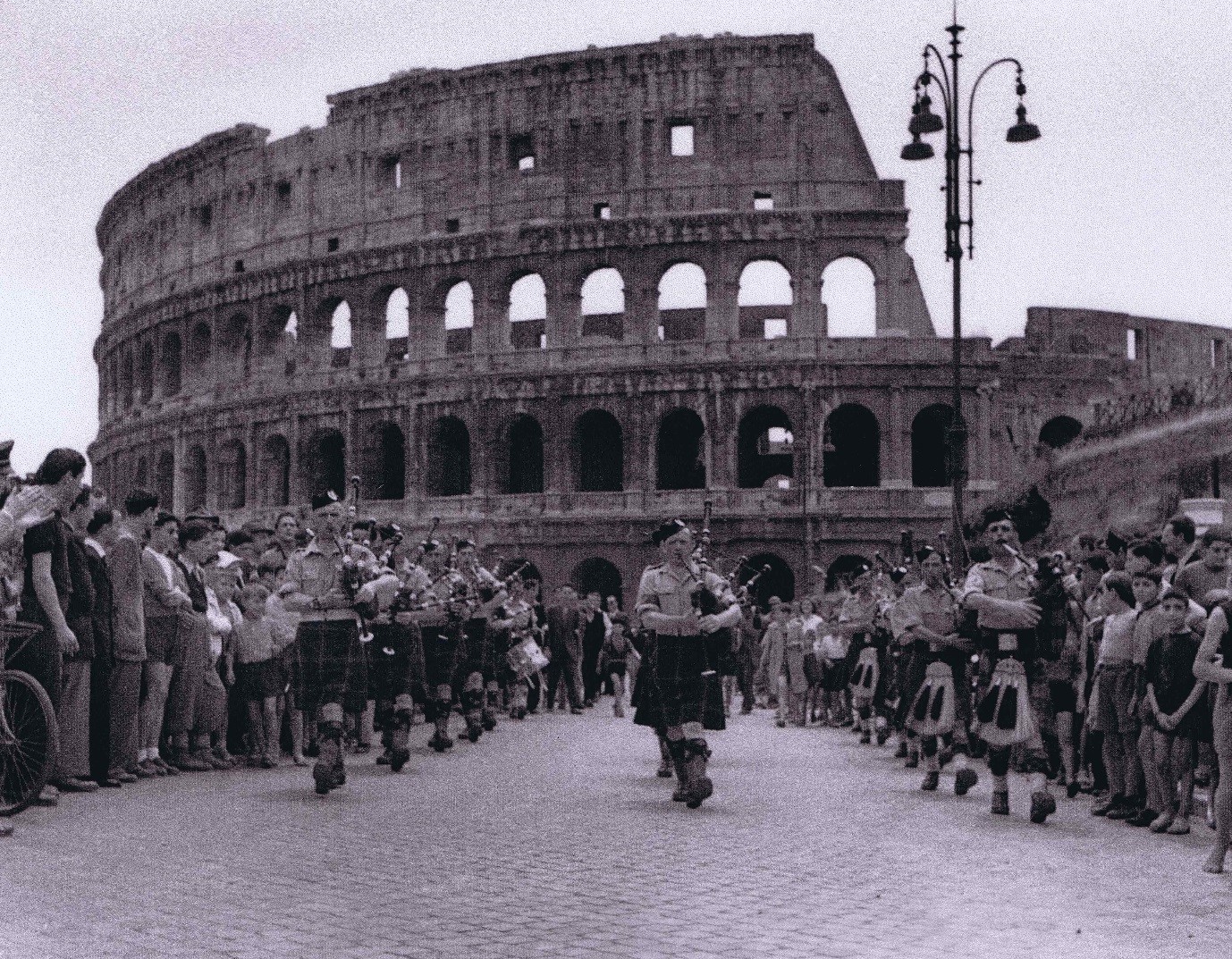 The Second World War began badly for Britain. For The Gordon Highlanders, two Battalions of the Regiment, the 1st and the 5th, were forced to surrender at St Valery in France in June 1940, along with most of the 51st Highland Division.

Yet both Battalions, together with their Division, were quickly reformed and fought with distinction in North Africa and Sicily. They returned to North West Europe on D-Day, 6th June 1944, and fought their way, along with a reformed 2nd Battalion (see below), from Normandy, through France, Belgium and the Netherlands to victory in Germany in May 1945.

2nd Battalion The Gordon Highlanders was captured after the Japanese took Singapore in February 1942. Despite this loss, the Gordons were well represented as British forces fought back against the Japanese in Burma. Two Battalions, the 8th and the 9th, saw action, but not as infantry. The 8th was converted to an Artillery Regiment, while the 9th became an Armoured Regiment.

Two tours of duty dominated life for The Gordon Highlanders during the postwar period: West Germany and Northern Ireland. The former saw the Regiment training alongside NATO forces against the nightmare Cold War threat of nuclear, biological and chemical warfare from the Soviet Union and its Warsaw Pact allies. The latter was the polar opposite, with The Gordon Highlanders combating a determined terrorist enemy in one of the longest running conflict in British military history.

Between these frequent postings to West Germany and Northern Ireland were others; in East Africa overseeing the end of Empire, and fighting some of Britain’s ‘forgotten’ wars, in far-flung countries such as Malaya, Cyprus and Borneo. The Gordon Highlanders also saw service under the banner of the United Nations, for example in Cyprus and Bosnia. 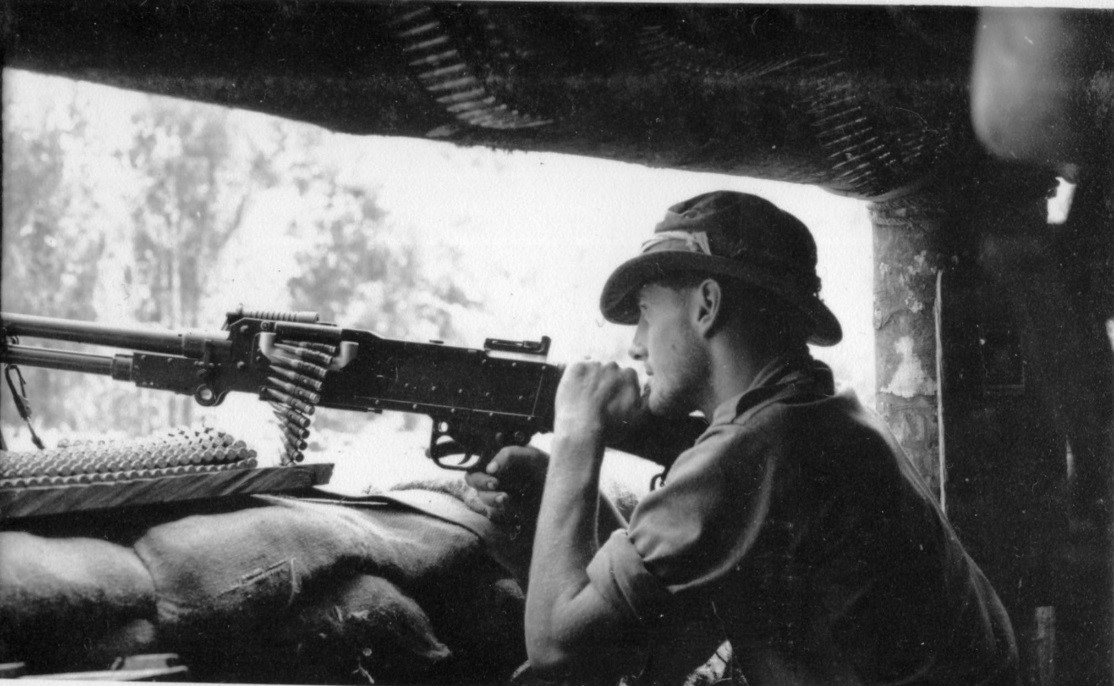 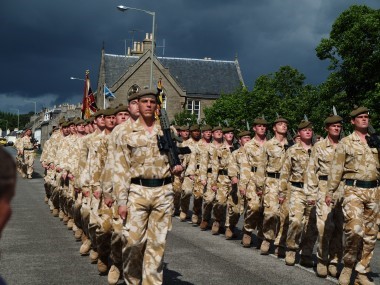 On 17 September 1994, after exactly 200 years of service, The Gordon Highlanders amalgamated with the Queen’s Own Highlanders to form 1st Battalion The Highlanders (Seaforth, Gordons and Camerons).

It is within this new identity that the legacy of The Gordon Highlanders continues to live on as a powerful inspiration to the men and women of the British armed forces.