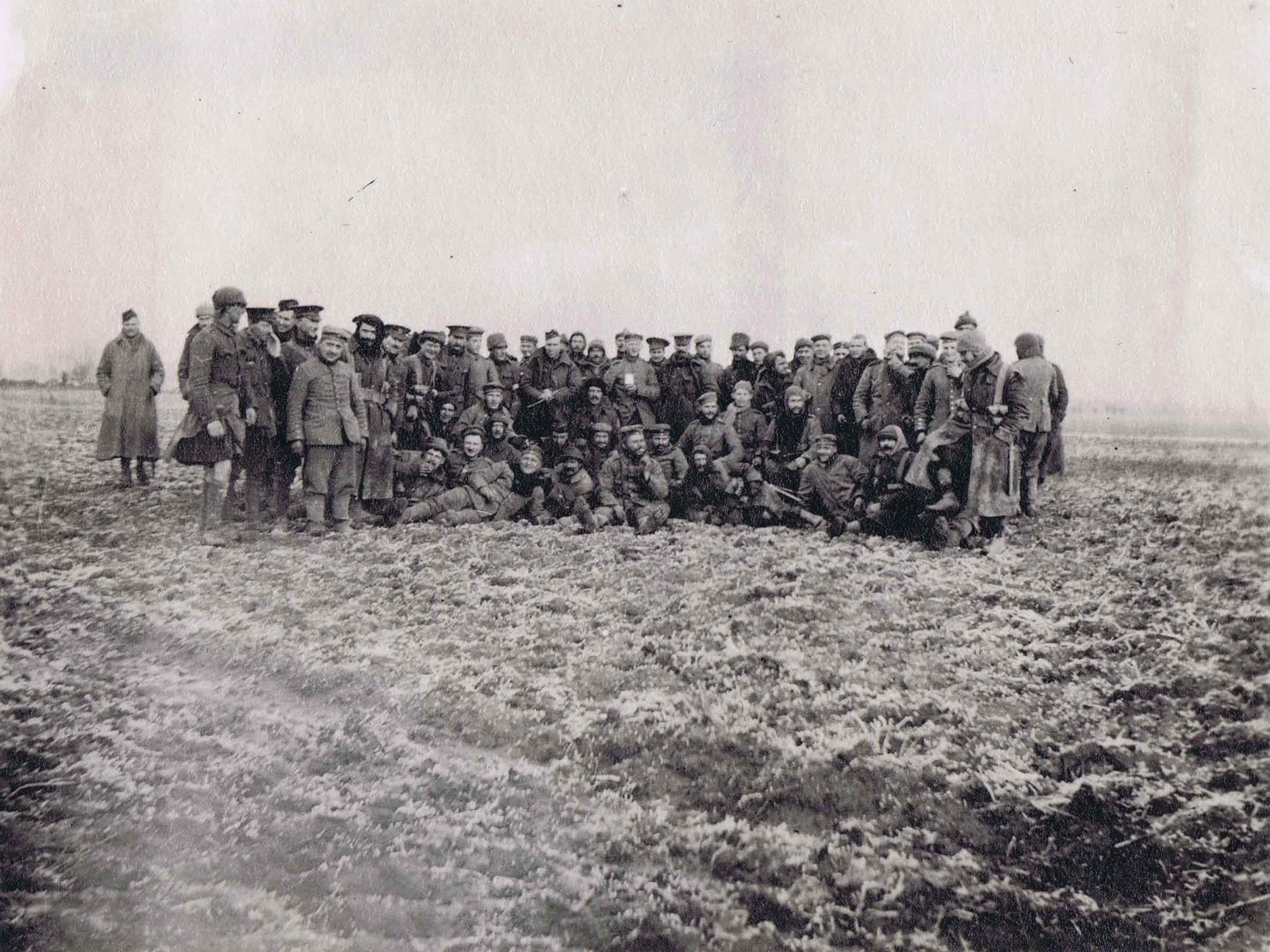 Photo of the “Christmas Truce” which took place in December 1914 on various portions of the Front, included in the scrapbook of CSM Herbert Styles, 2nd Battalion The Gordon Highlanders.

The Christmas Truce was a series of individual and unofficial truces that took place on the Western Front during the first winter of the war. After months of fighting each other, soldiers began to exchange greetings and songs between their trenches in the days leading up to Christmas Eve. On Christmas Eve and Christmas Day English and German and some French soldiers ventured into No-Man’s Land and fraternized openly exchanging greetings, souvenirs and food rations.

Both 2nd and 6th Gordons stationed near Sailly-Fromelles were involved, but 1st Gordons at Westoutre were not. Diaries and letters held in The Museum archives recorded the events of the truce through the eyes of The Gordons, which you can find out about more below.

We’ve been at peace for two days now, hob-nobbing with the Germans half-way across the front and they are only 250 yards away and to see us all in the space between shaking hands, wishing happy greetings and all that, was amazing.  It started yesterday, in the morning, and has gone on ever since with us, though they are firing on our right and left.  The pipes were playing, cheers, cigars, cigarettes and chocolate handed all round.

Some men took the ceasefire as an opportunity to bury their dead. Some had lain out in No Man’s Land for weeks. The 2nd Battalion agreed with the Germans to collect and bury their dead side by side. The 6th Battalion of the Gordon Highlanders had a joint burial service conducted by the battalion’s chaplain and a German divinity student. It took place in a waterlogged cabbage patch. About 100 British and German bodies were collected for the funeral, which was recorded by Captain Walter Imlach of 6th Battalion:

Our padre, who very fortunately had happened to come up to the trenches that morning to wish us a Merry Christmas, arranged to have a service. After the burials were completed we lined up on appointed sides of the ditch, officers in front and burial parties in rear. (I was very proud to be one of our party on such an occasion.) Our padre then gave a short service, one of the items in which was Psalm 23. Thereafter, a German soldier, a divinity student I believe, interpreted the service to the German party. I could not understand what he was saying but it was beautiful to listen to him, he had such an expressive voice.

Those who decided not to engage in fraternization took advantage of the ceasefire to gather supplies of firewood, potatoes from the surrounding fields, or to simply tidy up their trenches and write letters home to their family and friends. Working on trenches in full view of the enemy became common practice by the end of the day.

When it was discovered that there were a number of barbers among the enemy, a number of men from the 6th Battalion were shaved by German soldiers in No Man’s Land. Some men freely admitted that they had no wish to fight each other. In some sectors, the truce lasted only a day or so; in others, it was only at the specific insistence of the High Command that normal hostilities resumed in January. Officers of the 6th Battalion arranged to have another truce on New Years Day so the the German soldiers could see the developed photos they had taken on Christmas Day. The truce could not go on indefinitely. Orders were given that fighting was to be resumed in January and any Company that fraternized with the enemy would be punished.

The truce ended formally for the 6th Battalion on the 3rd of January 1915. A German Officer informed Captain Dawson of ‘D’ Company that they had received instructions that ordinary conditions of warfare must be resumed and that the truce would come to an end at the end of the hour. Volleys were then fired all across the line the next day, thus bringing to an end this festive ceasefire.

You can see Captain Bains’ handwritten account of The Christmas Truce on display in The Gordon Highlanders Museum during your next visit!