The Gordon Highlanders Museum Gets To Star In The Brand New Aberdeen Monopoly Game ! 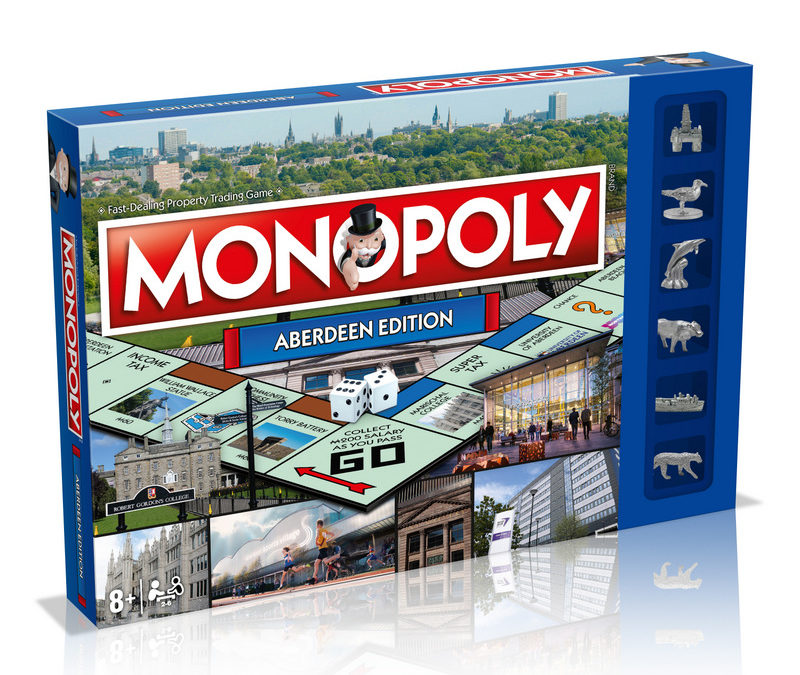 The Museum occupies a light blue coloured space in this brand new edition, which was being launched this morning at a red-carpet ceremony at the Aberdeen Art Gallery. (8th November 2019)

Amongst the very many leading city landmarks that get to feature in the game include us, the art gallery, Marischal College, Aberdeen FC, Castlegate, the William Wallace Statue, Union Street and pretty much all the great and good of Aberdeen!

In this new unique version of MONOPOLY whilst the rules, money denomination spirit of MONOPOLY stay exactly the same .. the spaces ALL become exclusively Aberdeen landmarks and favourites. And the tokens are city themed too. OUT go the classics like the Scottie Dog and boot – literally given the boot. IN come angus the bull, oil rig, leopard and more.

Very many of the Chance and Community Chest cards are customised too. One card pays players for ‘leading out Aberdeen FC in a European Cup final, alongside Angus the Bull!’.

Winning Moves UK are the makers of this version under official license from MONOPOLY owners, Hasbro.

The game is on sale from 10am today at all good book and toy stores, including Waterstones, WH Smith and The Works – and very widely online, including on Amazon.

Hasbro (NASDAQ: HAS) is a global play and entertainment company committed to Creating the World’s Best Play Experiences. From toys and games to television, movies, digital gaming and consumer products, Hasbro offers a variety of ways for audiences to experience its iconic brands, including NERF, MY LITTLE PONY, TRANSFORMERS, PLAY-DOH, MONOPOLY, BABY ALIVE, MAGIC: THE GATHERING and POWER RANGERS, as well as premier partner brands. Through its entertainment labels, Allspark Pictures and Allspark Animation, the Company is building its brands globally through great storytelling and content on all screens. Hasbro is committed to making the world a better place for children and their families through corporate social responsibility and philanthropy. Hasbro ranked No. 13 on the 2019 100 Best Corporate Citizens list by CR Magazine, and has been named one of the World’s Most Ethical Companies® by Ethisphere Institute for the past eight years. Learn more at www.hasbro.com, and follow us on Twitter (@Hasbro) and Instagram (@Hasbro).